Its come to my notice that we have not had a trackplan from the files for a while. just by coincidence while looking for something else the other day, I came across something that's a wee bit out of left field, and quite a departure from our normal fair. The location is the Petone esplanade where in the old days there was the Gear meat works (as well as Odlins timber, but that's another story). Now I just thought that it would be a standard set up with a passing loop on the seafront and a selection of sidings running off into the works. I was completely wrong. 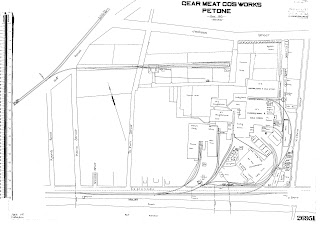 'Its 1 MB for those with slow connections'
Looking at the bottom right of the plan reveals a multitude of tracks running at a variety of interesting angles. There is a small loco shed out on the roadside fence as well. The stock yards which I could not initially find (I did have the size increased) were at the top left, and were shunted off the line running into Wellington.

I'm quite glad I found this, buried as it was in a pile of scans etc. With a small diesel shunter it might make quite a neat 'non-standard' model for those who are not overly keen on modeling NZR prototypes, but want something different.
Posted by Motorised Dandruff at 1:00 PM

very interesting find, I went to google earth to have a look - there is not a single building left from the time, now we have a Mc Donalds (or is it a Pizza Hut), the warehouse and lots and lots of parking lots on the same spot... sad !

"Ancient" Journals had a track plan and some notes on this, plus another had a plan of their rather neat 4-4-0T steam loco too - will have a hunt to see which issues they were & add note tomorrow.

From memory they only covered the track on the seafront, and there were just lines leading into the works, with no trackplan inside.

yeah still, the article had an inspiration view of a land crab parked on the seafront verge. 1982??

The article was in the December 1985 Journal - "Petone's Foreshore Railway" - by Gavin Sowry - 2 pages (7/8) , a list of the three locomotives, nice sketch of the railway lines along the Esplanade, with the sidings into Gear Meat co etc - plus suggestions about modelling it as a shunting layout.

I'll hunt up the Barclay 4-4-0T plan reference and post next week.

That "missing" reference to the Gear Meat Company 4-4-0T Barclay locomotive (1913) was tracked down last evening - I located it in the February 1995 NZMRG Journal issue, pgs 20-23; attributed to one "Jim Smith" on reading the fine print, I noted it was a "reprint" from the Continental Modeller of March 1993 - there is a nice plan of the loco,resplendent in 9MM scale (or is that "P34"??).

There is also a line drawing of the various sidings into the GM facility, one from the "mainline" beside the Petone station, and others off the Hutt Park Railway line, which ran along the Esplanade.

Eerily, the plan & notes are in an issue of the Journal which also contains an article on NZ120 for Messers Batchelor & Bond. (Turn up Twilight Zone theme.)

The loco itself used to sit out side the Silverstream Railway gates, resplendant in blue and sometimes adorned with a face...however, a drive past yesterday morning found that it had been relocated inside to in front of the main storage shed.