Ribbed for her Pleasure: Now available with fewer inches

It must be a while since I last posted anything here since I can't work the blog software anymore.

Among my email inbox of black friday sales spam I see that PSK Modelbouw now makes wee 20 foot containers. I enjoyed their 40 footers in this episode so I must order some of these fellows and give them a spin in a last-chance effort to get myself into the trainroom. If I can still find it.

TT Containers
Posted by Kiwibonds at 3:42 AM 3 comments:

"Completing stuff and not starting additional new layouts is a good policy. I'm in the process of completing a number of unfinished projects at present. It's a real buzz to have modelling projects completed rather than having lots of partly done work hanging over one creating a lingering long-term feeling of dissatisfaction."

I thought I should examine this further. So, with out further addo, the Man-sion as it stands this morning. 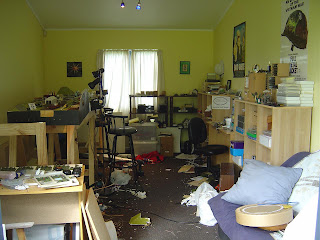 I suppose its easiest if we start from left to right. On the desk out of shot are a collection of 1:105 scale models for the Fell museum in featherston. Visible on the desk is my WW2 early 1944 Russian army that I have been working on since 2007. Back left is Paekakariki, which has been absorbing/sucking time since 2009 (though given that its a 5/10 year project I'm not overly worried about it). Sitting on top of it are too many 1/2 finished projects to mention. OK, I'll try. Engine shed, turntable, more wagons for Fell museam, DCC controller sockets, module connecting tracks, Loco servicing depot, 2 signal boxes, railway station, various wagons. This is just the stuff that has actually been started....

Middle far end of room is a collection of 25-28mm colonial war gaming terrain that I build for something different. Most of it has been used once. Back right is the collection of loco and wagon bits. More 1/2 started projects than a goblin could shake a stick at (unless you can find a goblin who is particularly adept at the art of shaking sticks). Further right is the work bench, with surprisingly few projects on it (possibly making it the cleanest surface in the room). A collection of war gaming armies (WW2 1944, 1980's central front, 15th century western Europe). Finally on the sofa there is a possible base for the smallest NZ120 layout yet, as seen at railex, and Wahio Forks, which is in the middle/start of a point blade replacement project as all the first attempts were not good enough for fine scale track. Oh, and in the Garage is my bush tram layout that needs work.

So, I feel that there is plenty there to create a lingering long-term feeling of dissatisfaction. Maybe lingering should be removed from the previous sentence?

As an addition to this post, I suppose I should 'unvail' my current reading pile.
(in no particular order)
The 4mm engine, a scratchbuilders guide.
landscape modeling.
Signaling in the age of steam.
The broad gauge of the GWR, BER, NDR and SDR.
Modeling the broad gauge.
Broad gauge broad sheet No 68
Broad gauge locomotives.
GWR 0-6-0 standard gauge locos

Not a shread of NZR reading material is there, though maybe a tip towards my next project (but in 2mm, of course). Maybe I should exchange it all for copies of Railfan in the hope that I can get back on track?

Posted by Motorised Dandruff at 9:56 AM 2 comments:

Well, a slacking off of postings in the last few weeks. A few big projects at work that have slowly chewed up my enthusiasm over the last month. I was going to be largely shot of them today, but due to a few hiccups they grind on another day. Then hopefully (which it appears is not a scientific term) things will slow down for christmas.

Apparently Pokaka was just this last weekend gone. I completely forgot about it.
Reports/rumours that I have received appear to indicate that a range of 9mm wagons was unveiled using 3D CAD and resin printing. I have yet to come across any photos  though. Probably they are on face book.

I'm currently trying not to purchase some 2mm society wagon kits. I really should as it might indicate to me once and for all that the scale is far too small and I'm wasting my time. I can live without trying to build another layout, given that's there are currently 3 on the go.
Posted by Motorised Dandruff at 11:53 PM 1 comment:

So, there's an excursion from Fielding to taihape and back hauled by Ab663. Now I have many failed attempts under my belt to actually photograph excursion trains, and this one started no differently. I keep forgetting that to go west out of Palmerston North, one first has to traipse across Palmerston North. To cap it all off the chariot demanded fuel. So, the plan is to get to the Rangitiki bridge the other side of Halcome. I had previously scoped out this spot, and it seemed like as good a time as any to try it out. The train is due at Marton at 4:15, and Fielding at 4:40. So, at 4:15 I'm at Fielding with the target location being the other side of 1/2 way to Marton, and the sky a selection of shades of grey. Optimistically I continue, but decide to take a back road that follows the railway just in case. an interesting drive and I pull up at a commanding spot and ponder waiting here. No sign of any smoke so I decide to push on. The kilometers wind off with no sign of a train round any of the road corners and so I make it too the bridge. Wonder if I have missed it somewhere in passing. . The plan is to walk down the west bank and onto the river flat. Its so windy that I can't hear anything train like coming down the hill.

1st problem.... theres a bit much water around

However I do notice a track down onto the flat from the other side. Away we go.

As I'm crossing the bridge, I notice a car ahead of me pull off the road. A guy hops out of the car with a camera the size of a small south pacific nation. So, I'm not too late. I barrel down towards the river past them, and turn off. Some bastard appears to have blocked the access way. There's nothing to it but walk. 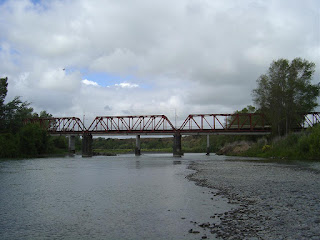 Walking a bit closer gives me this. 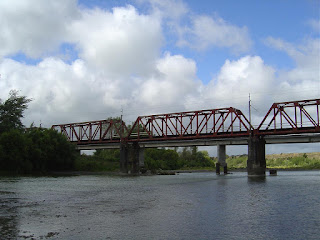 I decide on a spot about 1/2 way between the 2. All the time I can hear the train moving down the hill. These steam excursions do not make much noise and suddenly here it is. 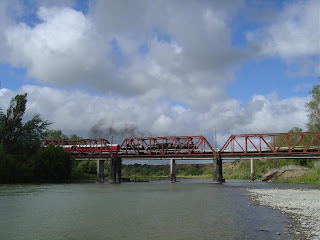 In retrospect Its a bit far away, but at least the suns out. 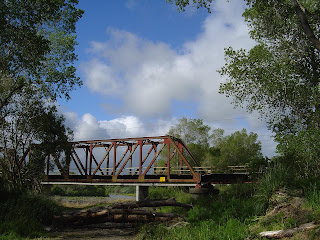 Returning to the car, I find this spot which could well have resulted in a far nicer picture, if only I had looked behind me.

The decision is then made to head back to Fielding and catch the train along the railway reserve at some point. And this works too. 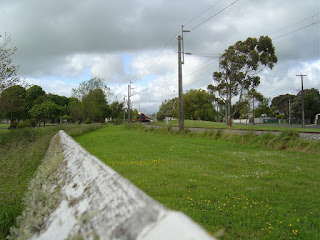 Down at the station the train is moved off the main line. I was going to write quickly, but by the time its headed down to the far end of the yard and back a good 20 minutes have passed. 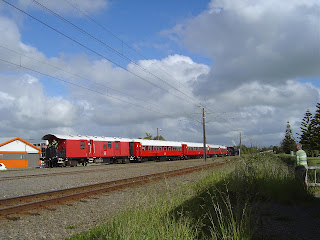 The sound of crossing bells announces another train, this time an express freight from Dorkland that barrels through at a great rate of knots.

I decide to try something arty, despite the fact I only have a 1 in 5 chance of shooting at the right time between moving 40' containers

Finally the loco gets put away, and I head home. 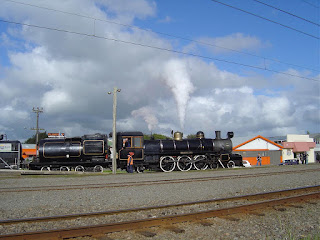 Well, the weather was sufficiently inclement to allow me to spend some time in the shed. after a bit of aimless pottering around I decided to make a start on the module join that I had not sorted out due to a lack of track joiners. With the track saw the offending bits were quickly removed and its now ready to properly sort out the track across the joins. 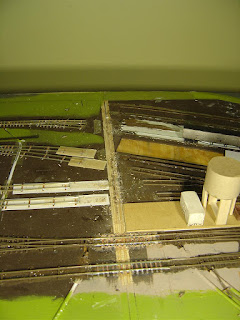 Further progress was held up by the lack of a charged power drill to fix the hinges to the boards.

Another short job in the Man-sion tonight. I was cleaning up the road crossing that I had filled at the start of the week, when I cast my eye wider to see if there was anything else that I could fill. I noticed the platform that has been sitting there for quite a while with no work done on it. It was planned to be temporary until I could replace it with something more solid, but given that its now been there for year, it seems to have won the battle. So, it was out with the filler to tidy up the ends and also fill the holes in the sides. 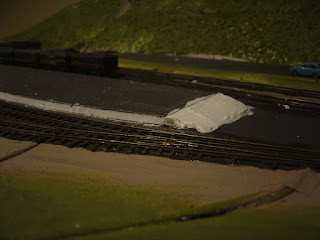 I then did some alterations at the north end. I have not really been happy about the height of the hills, so it was out with the craft knife. Taking 2 inches off the top (Its been a while since a barber could do that to me) has opened up the loco depot nicely. 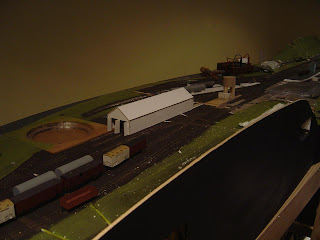 Must get something done about that empty turntable pit.....

Back to the shed

I finally made it out to the man-sion tonight, the first time in a week or so. I must sit down at some point and make a list of potential projects to work on the get some momentum on this project. I did a bit of pottering on the road crossing filling in some of the gaps where the DAS had shrunk. I'm not sure how to use this stuff. Theres plenty of people on RMweb that seem to make it work, maybe it needs PVA mixed with it.

While I was working on this, I noticed a purchase from Railex that I have neglected to mention. Found in a box under a table was a collection of TT scale cars. Sifting out the convertibles, I found these 2 models which fit for my 1960's time frame. 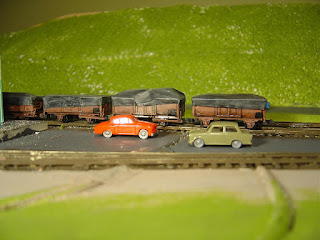 These look like 1960's vintage European cars, possibly of an eastern bloc persuasion. The one on the right is fortunately too long to be a Trabant, but does bear a passing similarity to British cars of the period as well. The one on the left has more of an American look. It reminds me of this shot from the Western Langford collection. This however looks like a Fiat of some sort (I have no idea, I just make things up as I go. Both a good thing and a bad thing in my profession). It does give me some ideas for a group of photographers on the layout, though the hairstyles will be hard to model 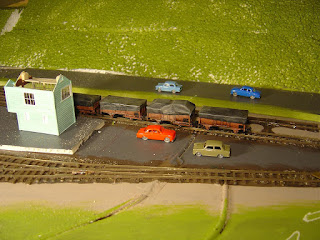 I brought 4 at $5 a pop (which is OK I thought). I'll paint the tires black, and give them a wash of Tamiya smoke and a matt varnish, which will tone them down nicely.