Well, it's the 1300th post here. I've got rather ho hum about these milestones. The first hundred was exciting, as was the 500th (I think) and the 1000th too. After that, I'll look forward to the 2000th maybe, but that's still quite a few months off.

More interestingly we have just hit 200,000 page views. Now apparently this is quite something on the Wibbly Wobbly Woo, especially for a small blog on an obscure topic read by a handful of people a day. I can only assume that our several regular readers have short memories and keep hitting refresh every 2 minutes.

I guess looking back over the last 5 years the blog has changed. It started mostly as modeling, history and a bit of rabble rousing. We merrily commented on anything and everything, from the Journal to the latest Kiwirail news. We have merrily tilted an windmills and targeted a few sacred cows.
However sometimes I feel its gone from an L'enfant terrible to middle age conservative (with improved spelling along the way). In some ways, I think this is a good thing. The scale has gone from the brink of extinction to a viable option for modeling NZR. This renaissance has been lead by several local manufacturers, one of whom took a huge punt on the scale several years ago.

How is the scale regarded by other NZR modelers? Certainly I feel that some self appointed experts tend to look down their nose at us. Others look on with mild amusement. I still think we tend to share more with the 9mm scale guys (and more than just a common number measurement). I also think its interesting that these 2 scales seem to be more 'go ahead' currently than the middle scale, which seems to be in somwhat of a holding pattern.

So, where to from here? N scale is changing with continuously available loco models giving way to shorter production runs, with repeat runs separated by several years. As an example of this, it's now hard to find Bachmann 4-8-2's in US shops. In the UK, spares of all sorts (both loco and wagons) are far harder to find. The scale needs freely available wagon wheel sets on 13.5 length alxes, ideally from on shore. I'd like to see some accurate steam loco mechs available to initially run under the current range of 3D printed tops.

To finish up I keep going back to the first post back in 2008. This whole blog was inspired by John Rappard. He started me in the scale 25 years ago. I'm just paying it forward to the rest of you.
Posted by Motorised Dandruff at 12:00 AM 4 comments:

Sent in By Grant Morell are pictures of my bush locos on his layout. For some odd reason they didn't move and I can only assume ;
1) I need to set up the decoder CV's correctly so that they read DC correctly.
2) The current draw in the Masterton town hall was a bit much to power my DCC box there.

This was a bit of a bugger as I was hoping for some information on how they ran on hills. 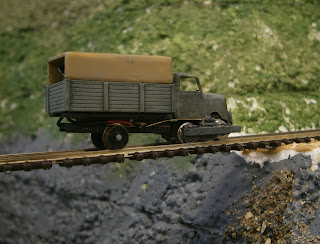 The rail truck precariously perched on a bridge with no pilings. It does look the part from this angle, even if I have to paint the wires. 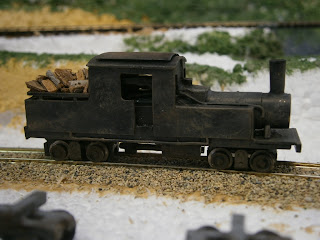 The Cb on a piece of ballasted track. This view may push me to at least build a small diorama. I've always wondered if stub points can be made to work OK in code 40 rail. Grant has made a pair that work for his layout in larger rail.

I've been pondering over the last couple of days about what I would do if I was forced/decided to start over. Its not anything earth shaking, just my idle brain at work.

I'm very lucky to have a room that is 20' by 12'. However if we do decide to move (and the lady of the house has been looking at houses on trade me) I'm quite unlikely to be as lucky again. I also feel that Paekakariki, though good as an idea, is an appalling waste of the overall space in the room. If I had been able to build from scratch, I may well have decided on a layout with several peninsulas, and probably a bit more operating potential. The MMW modular concept would have got a bit more of a look in. This would have created a more flexible layout for any future house moves. This is all from a purely practical analytical standpoint. As it is, the layout takes up one side of the room, and my bookcases and wargaming gear the other. I have designs on the top of the book cases for another project.I wonder if there is anyone who would want to take such a large project on. It may suit another group (or a group)

Oddly enough, when Mr Bond visited last night, he thought the track ran really well (visitors and reliability seldom mix, he's well come back any time) and I should get stuck into the ballasting. Even the bush tram locos ran well, though 1431 needs some surgery after the mech took a trip onto the floor at Masterton. Its nice to have a different set of eyes looking at something (beyond the normal pack).

Maybe come summer when my workload is not quite so daft.

Just a couple of things to finish up from last weekend.

I've been insanely busy at work the last couple of weeks, but things seem to have sorted themselves out this week. So I had the inclination to nip out to the mansion for a photo or 2.

First up, the module as its stands at the moment. The mainlines are protected by foam to stop accidents. I like the concentrated simplicity of the track plan, with plenty of shunting in a small area. I have to add a fidddle yard at the right hand end to use it as a stand alone layout. 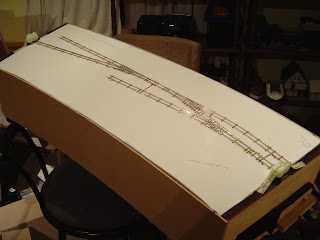 I also did some shopping for scenic material. First stop was Scenic Textures, where Brian was able to hook me up with some foam slab. As good as the woodland scenics stuff, and locally made (oh and only $15 a bag. I grabbed 2 and I'm looking forward to trying it). 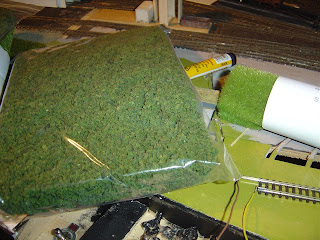 On the right there's is a different type of scenic texture, this time from Kelmara loco depot. Its similar to the Busch sheets I had already used (of which I picked up another roll), but its on a mesh backing rather than a paper backing. It looks good for weed patches or possibly house lawns (with a bit of a trim).

I had a very enjoyable weekend with MMW and the VCC team at the Masterton show over the weekend. despite showing up late both days, I had the chance to do some modeling and also talk bollocks with other like minded individuals.

With showing up late I was forced to share a table with Brabs from VCC. This was good for me as there was a never ending selection of tools to 'borow'. I also had to supply polite replies to 'I've lost my nuts'.

I did manage to get my MMW module working, and ran a few trains. However for some reason my Cb and bush railcar refused to work. For some odd reason the DCC box could not program anything.

I took a few photos, but unfortunately Brabs is the unacceptable face of model railways, and the camera agreed. Instead here is a couple of pictures of Kai iwi from different view points. I should do them in a sepia tone, but black and white seems to suit. 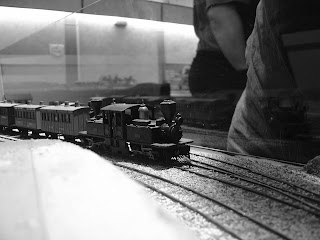 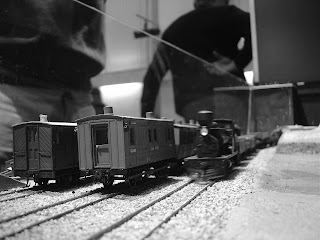 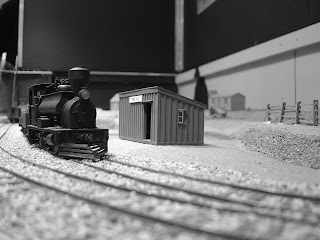 I also had a few interesting chats with a variety of NZ railway 'personallities'. I had a printed H class top o hand, and was told buy one magazine editor 'come back when it runs'. Sounds like a challenge from him and his mustache.

Well, due to things at work going a bit nuts this week (which is a vast understatement), I have made no more progress on the MMW module. The plan is to take it down to the Masterton show this weekend and get it running then.

Well will be on the MMW stand, drop in and say hello.
Posted by Motorised Dandruff at 10:12 PM 4 comments:

Well, more work today on the MMW module.
First up I tested the side and ends on the top (which I am using as the plan). The side is about 20mm too long. I then have to cut this off the side and reglue it. Cutting the side then broke 2 knife handles, so there was a trip to Mitre 10 to buy a new knife. Finally I got everything glued on. The second side was glued at one end.
I then looked at the tracks exiting the modules. I had cut these short as I had stuffed up. I had to apply track joiners to them. This ripped the rail out of the sleeper webbing. I've looked at it and have decided that I can thread code 55 rail on and solder a PCB fisplate as the last sleeper, which should work OK.

A couple of hours later and I come back to do the final shaping. 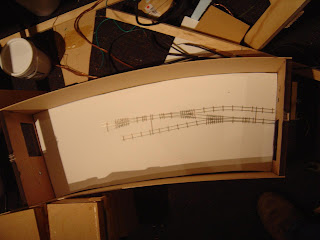 This managed to work, though I'll find out tomorrow if its glued.
(The base is placed there simply to help with the shaping, and is not in its final position)

And the title? More than once this afternoon I took timeout to pound a scrap piece of wood with a hammer in shear anger and frustration. Its not relaxing me at all, and I really need a way to let off steam from work stress.
I swear I'm not far off going back wargaming for another 10 years......

With a week to go till the Masterton show, I've decided to have a crack at knocking up an NZ120 module with MMW ends. I know I've had plans before, but they have always been a bit grandiose. Time to do something a bit more bit sized. The aims are to build a small module that can be connected to other modules with MMW endplates. It has to be small enough to fit on a shelf. It has to be capable of some shunting. That should about do it. After all, I only have a week.
(Oh, and not use any really fancy tools either. well, other than a laser cutter...)
First up, the track.
The track work previously earmarked for Grassmere and Weta creek, is now seconded to the new project. The tracks on the left hand side are the main (bottom) and siding (top). 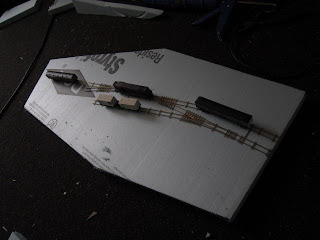 The base is made from 1" blue styrofoam. I made the sidings long enough to accommodate at least a 50' wagon. More if 4 wheeled wagons are used. Maybe not big enough for some, but more than enough to meet the aims of the project. The whole length is 80cm and the width 30cm. 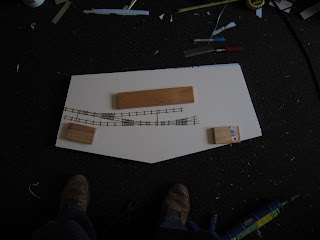 There is space for 3 line side industries (illustrated with wooden blocks). I have added a foam board top to bring the track up to the correct level for the end plates. 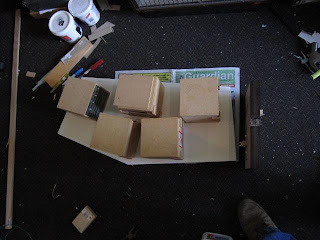 Glueing the top on. plenty of mass used to keep it all flat while its drying.

And to the ends. I cut a piece of MDF of about the correct length and 20cm high. The ends were attached using no more nails and tacks. I made sure that the sides were about 1mm up from the bottom of the ends. they are desined to rest on the ends.
Now, despite having a PhD, I managed to get the ends the wrong way round in every permutation before finally having both the correct way.

Tomorrow I'll put the 2 together and add the inner face.
Posted by Motorised Dandruff at 3:39 PM 1 comment: