Two for the price of one

Came across some other pictures on the camera tonight, so thought I might as well talk about them. I've been messing around with the track layout for paikakariki loco depot, and I think Its almost OK now.

(cropped together from 2 pictures which don't quite match, but you get the idea.
UPDATE. Darryl has taken pity on me and sorted it out properly))
Of course, the way to do it is full sized, and pushing loco's around to see if its going to a) work and b) look the way I want. An important part of modeling real locations is to choose scenes that you like the look of, then compress then into the space you have while not losing the flavour. It sounds obvious, but....

The general operating plan is that locos arrive, uncouple from the train, then run backwards around the back track to the turntable. This is set up to rotate only between the 2 options, replacing a delicate alignment job with running a stall motor into a hard stop that lines up every time. The loco can then back up to the oil/coaling stage. From there it runs forward into the shed and into the que for the next train back north. It sounds simple, but I think it will probably be a full job on the model just shuffling loco's (and quite honestly it will probably be the one everyone fights for, especially with all those big steam loco's I have yet to build)
Posted by RAB at 10:50 PM No comments:

When I started all this, I didn't know if I was going to be able to keep it up for long. So tonight I'm enjoying a Black Mac (I've run out of my own homebrew).
Further to this weeks witterings, here's an early proof of concept model that I knocked up in an afternoon. 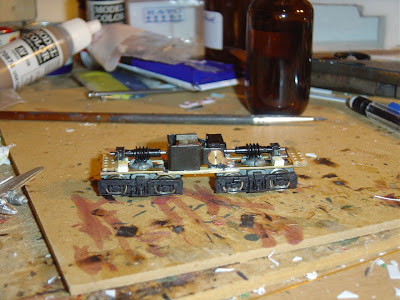 A correct wheelbase De underframe built from the bogies of a kato Bo-Bo-Bo electric using the worm drives, and a tenshedo motor from a SPUD power unit thingy. The frames are built up brass held together at each end with PCB. It does run, just not very well, and needs some weight (and the correct bogie side frames as well).

Now if an old luddite like me can do it, surely one of these smart young things can sort out a decent way of doing this.
(And where are the piles of pictures flying in of models everyone else is making? NZ120 only please, though I've seen some very nice pictures today of a 9mm scale Dg. The builder reports that after 15 years in NZ120, 9mm is really quite simple)
Posted by RAB at 9:09 PM No comments:

More of the same

Where to start tonight. More discussions on the NZ120 list. One idea that's been raised is of selling a 'train set' with a loco, a couple of wagons and a circle of track, all for the princely sum of $350. There is a slight technical hitch with this plan. While admirable, it fails to take into account the (standard?) mark up at model shops, which from experience (admittedly a while ago) is getting towards %50. Suddenly the economics of the situation go through the floor, and you seriously need to find someone who is willing to 'grow the hobby' essentially out of his own pocket.
We then rolled onto locomotives, and it was postulated that a scale mechanism could be built sourced from Australia, with correct sized wheels and axle spacings etc. Again the only technical hiccup was that only one bogie would be powered. Now I don't know about the rest of you, but I remember the bad old days of the 80's, where loco mechanisms were a bit of a joke in N scale. Atlas and kato changed all that, with decent powered locos that ran well. Loco's powered on one bogie were/are pretty much useless for pulling anything, and tend to spend all their time on a back track looking pretty. I can't think of anything that would turn people off the hobby faster.
Well, not overly positive in the last couple of days, I'll have to get back to some modeling won't I
Posted by RAB at 11:19 PM No comments:

The future? Or just a touch of the vapours...

On the list in the last couple of days; rapid prototyping is back. While no real progress in NZ120 has been reported, Paul has at least done some work, and having seen the bits for a 9mm dubs A, I must admit I'm impressed. However I'm still fighting the urges to learn CAD quite successfully. It will be interesting to see how the La he's planning pans out.
As an offshoot of this the possibility of making a De has reared its head vampire-like again. We will now proceed over the next week to hash out the best mechanism options. There are none. The Farish class 20 is too expensive to start with,and both it and the Minitrix FM12-44 have the wrong bogie's and underframe(Ahhh, that feels better out). Now, just between you, me and the lamppost, there seems to be a blindingly obvious solution. Its easy to buy the wheel's, gears and worm drives from KATO and Atlas, and it should not be beyond the realms of possibility to put these ready made bits into a RP chassis with correct bogie's etc. It doesn't seem like a big jump, but maybe I know nothing.
Posted by RAB at 3:29 PM 1 comment:

By building a layout on them of course! 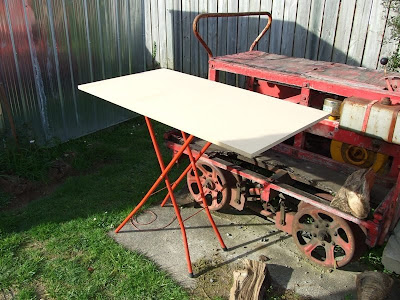 Bored with ironing the clothes. With a little work, you to can make this a chore worth doing.
(Layout still in its early stages, and is already threatened by a rebuild. The builder still refuses to admit that he will not be able to run the item behind it, despite obvious scale problems)
Posted by RAB at 9:48 PM No comments:

Well, have not really managed to do anything in the last 2 weeks modeling wise. The Ja tender has a footplate and the bogies are attached, but as my Wife is home from Uni for 2 weeks, not much is getting done in the evenings as she doesn't like the sound of filing metal.
I was going to post a pic of my bothers new layout base, but appear to have deleted the picture.
(and I see I'm up to number 8 on the google search).
Posted by RAB at 10:07 PM No comments:

Now you see it

Discussion on the NZ120 list in the last couple of days has been on modeling catanery. Now, since I'm going to have to bite the bullet and actually do this at some point, I've done a bit of thinking about this. My premise is that most of the wires blend into the background due to the mute colours. In the following photo you can see what I mean. 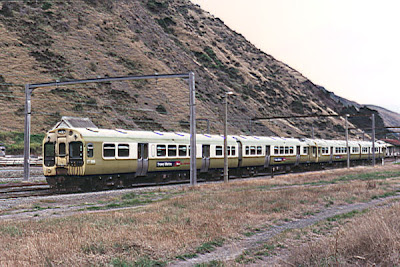 From a practical point-of-view, the wires will gather dust, and get in the way of any derailment fixing.
My plan is to model the carrier wires (the ones running across the tracks) and leave the main wires out. It's easier to trick the viewers eye into perceiving whats not there rather than modeling everything in the scene
Posted by RAB at 11:10 PM No comments:

I've been trying to come up with a solution to the scales biggest problem; a free running wagon/bogie underframe. I had recently purchased some top hat bearings and correct sized wheels from the UK ( www.markits.com). However, doing the math reveals that there have to be some big cutouts, and the bearings must be right out in the axle boxes to accommodate the longer than prototype axles. The answer came to me in the shower yesterday morning; inside bearings. Guy Williams ( GWR loco builder extraordinaire and sadly deceased) came up with this for locos 20 years ago, and its also been used in the railmaster 3-point wagon suspension system. Basically the axle runs inside a brass tube of the correct diameter and the solbars/bogie sideframes are just cosmetic. the only hard bit is filing down the axles to the right length. I quickly knocked up a jig and soldered up the bogie innards for the Ja tender. 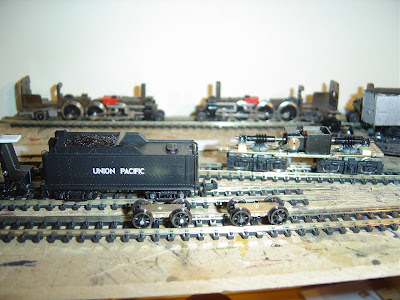 I've also added some copper clad board so that I can attach some pickups (when I find my tin of phosphor-bronze spring wire, which I've yet to locate after out move 8 months ago. Maybe its sitting in the same box as my S scale A and Ab).
Also note in the background a test mech for a De. I still have some work to do on this, and will comment when it actually runs OK.
Posted by RAB at 8:49 PM No comments:

Its that time of the month again, and it was time to go to the NZR railway modelers group local. I brought along the pair of Da's, and this provoked an interesting question and answer session on the differences between phase I, II and III models. After this had finished, the minute keeper duly informed us that this was the first time in 26 years that the group had had a discussion on Da's. Important information that, I've never broken a long standing record.

There has also been some interest in the Air portable layouts, with some interesting suggestions being made. I've also come across a website which has some interesting links on module construction; http://www.hotrak.com/?cat=3. Its in HO scale, but I've not managed to come across anything equivalent in N scale, which given the popularity of NTRAK is rather strange.

I've also wondered about getting a blog hit counter. I know of about 6 people who have found this blog, but I'm still only #25 in the Google searches. Maybe I should do a post with NZ120 repeated 500 times to skew the results.

ECMT has again steeped up and proved me wrong (its like I'm at home with my wife). The second NZ120 local rag cover was October 2001 with this shot( heads up to www.kiwibonds.com, one of the best train photo sites on the net. The latest 1980 stuff is fantastic). This is a far better shot than last weeks. Makes me wonder just what Brian was on that night.... 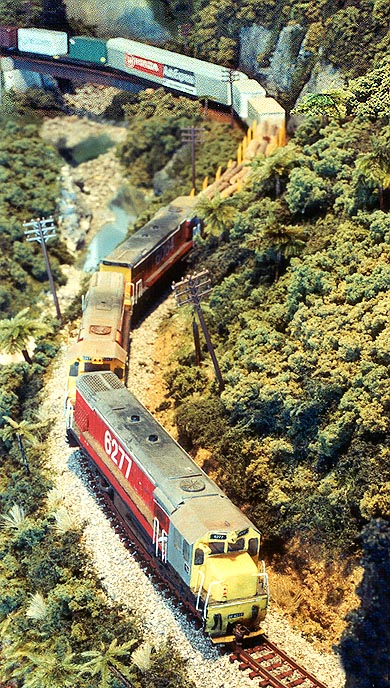 On a different note, the brains trust discussions have been meandering over the last couple of days, and the question now is,; can a layout be designed that's air portable (and I don't mean delivered COD out the back of an RNZAF Herc. For one thing they are not that reliable, and the lead time to get them is quite long).
the AirNZ website stipulates a luggage size limit of 25Kg, and combined dimensions of 158cm/62". A second piece this size is $15 extra and a 3rd piece $50.
So here's a challenge then; design a layout that fits these dimensions. I'd offer a prize, but due to funding issues(like none) this won't happen. Maybe I should get sponsored by someone. A brewery would be good. I should approach Emmersons (Richard is a train geek as well as being an excellent brewer)
Posted by RAB at 9:56 PM 1 comment: