The ability for the layman to make multiple cast copies of things in rubber molds on the kitchen table was a massive advance for NZ modeling when pioneered by Brian Cross in the 1970s.


Casting is especially useful in our NZ120 scale because the small sizes and levels of detail required to make a convincing model are such that we can often cast complete wagons in one piece – even bogie wagons. We’ve talked about casting and used it to produce models often on this blog, but without really showing the basics - this series of posts are intended to do that.


Casting can be broken down into four stages that we’ll cover in detail over the next few weeks:

'Design' in this context refers to figuring out how to cast your model, which will determine how you make your master(s). Can you cast the entire subject in one piece or will you need to make multiple castings that are assembled like a kitset after casting? To answer this, you need to understand what casting can and cannot do.

The simplest casting employs a detailed mold that has resin or some other material poured into it. After it sets you pull it straight out. There is detail on the face of the rubber mold of course, but obviously not on the topside of the casting (in the picture below) which is open to the air, causing the resin to set flat after it levels off, like the surface of a cup of really really stiff coffee (Turkish, plain, no froth, marshmellows or cocktail umbrellas). Another nice thing about these simple molds is that the inevitable air bubbles caught up in your in the resin (which make your models look like tiny Swiss cheeses) will nauturally rise up through the heavier resin and sit on the surface where they can burst (or be burst).

Although simple in concept, you can do a lot with these molds, for example we will see shortly how one can make an entire wagon top in one go as a simple one part mold - as long as there is a flat surface that is the 'topside' exposed to the air (for example the base of a four wheel wagon that could be glued to a Peco chassis).

The challenge comes when you either need detail on both sides of the casting or if you have such large undercut details that would render your casting landlocked and unable to be extracted from such a mold, as below.

( OK, that's a really bad drawing, because the rubber is obviously flexible, but if those steps stuck out further you would have problems, especially if they are close to the bottom corners). 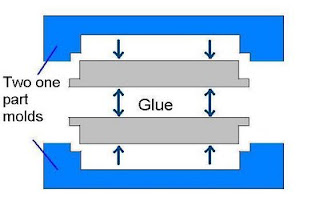 The other alternative, and the more complex kind of casting, is the 2 part mold below, in which several pieces of mold provide detail on all sides of a single casting. These are of course more tricky than the above because you need to ensure that the two mold halves line up properly, that you can then get resin into the mold, and any air bubbles out.

You can mix methods of course - for example, many of the resin NZ120 diesel loco tops that were produced for sale were made from a combination of one and two part molds stuck together. The subject's shape and your casting skills determine which way you go!

More in subsequent posts under this 'Casting' category...
Posted by Kiwibonds at 1:00 PM

And here's a fresh blog posting on the same subject :
http://waikikamukauchronicles.blogspot.com/

Me too. I'm just starting on a wagon master I want to make castings of so am looking forward to the next installment.